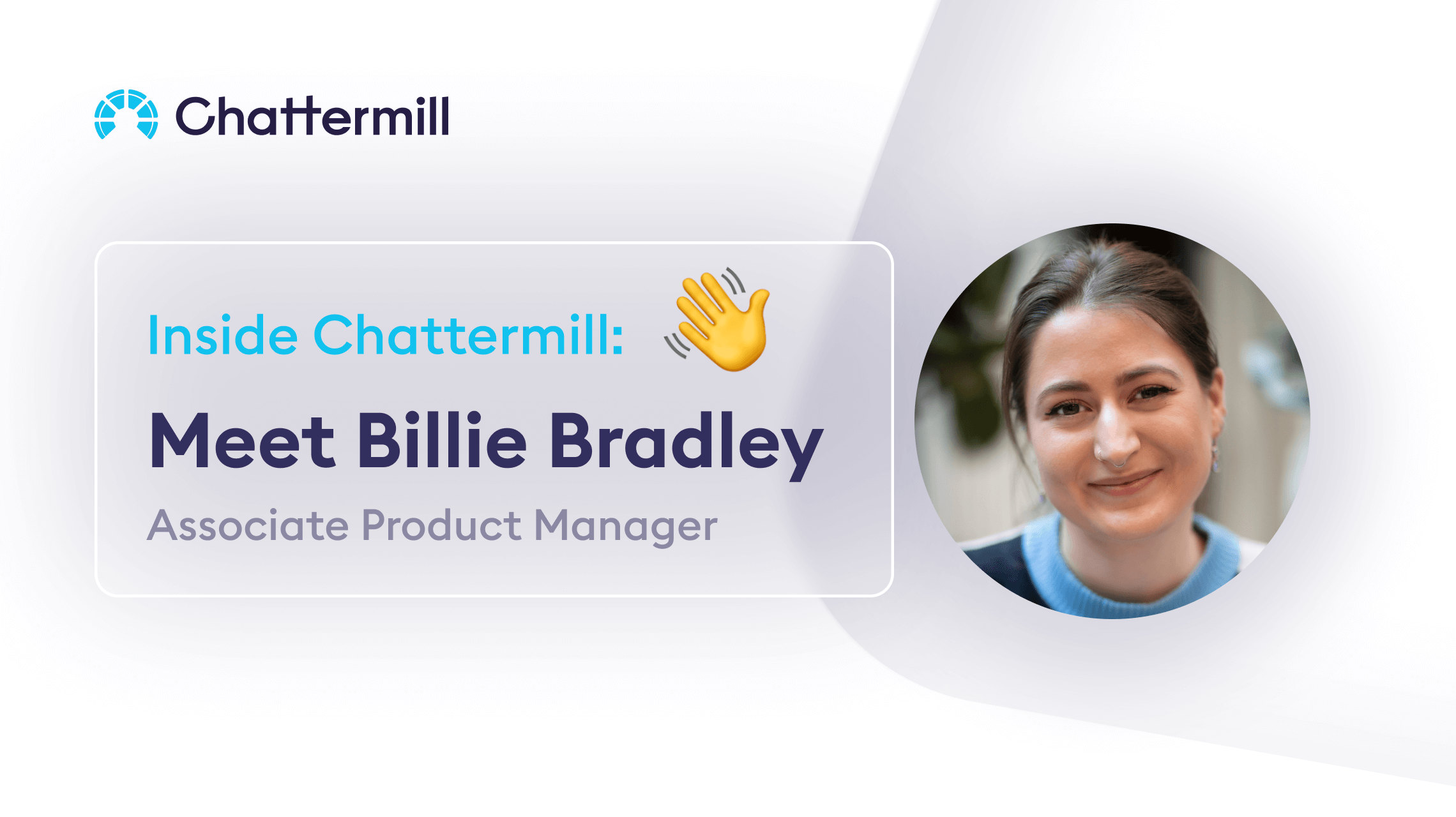 Curious about what it’s like to work at Chattermill? Meet Billie Bradley, who works in the Chattermill Product team.

Billie joined Chattermill over three years ago and initially worked in our Customer Experience team, before recently moving to Product. She talks about her reasons for making the switch, what she loves about Chattermill’s team, and her love of fridge-cold Cadbury’s chocolate.

PS. Want to work with Billie and the Chattermill team? Check out our open roles!

Why did you join Chattermill?

I joined back at the start of 2019, so I’m casting my mind back a bit, but I was keen to work somewhere fast-paced where I could learn and develop quickly.

I remember being impressed by how genuinely invested in the company everyone I spoke to was. I liked the culture of responsible ownership – you’re trusted to make the right decisions and take responsibility if an idea doesn’t pan out as expected.

What made you decide to change roles?

The work I did as a Customer Experience manager was beginning to overlap more and more with the Product team, and I found that the product-related parts of my day were always what I looked forward to most.

I’d been mulling over the idea of Product Management as a longer-term career goal, so it's been brilliant that I’ve achieved that without leaving my lovely Chattermill team.

It's also really exciting to be able to work on a product I know inside out after working so closely with our users for three years.

Have you found there are a lot of transferable skills between CX and Product?

Yes! I think the core skill needed for both roles is the same: empathy – the ability to listen to and put yourself in the shoes of your users. Problem-solving is another big one, along with juggling the needs of multiple internal and external stakeholders.

I’m still finding my feet, but I speak to our users as much as possible. I work very closely with our data science and engineering teams which has been a bonus because I didn’t cross over with them as much in my previous role.

I’m managing two new features at the moment, which has involved everything from collecting feedback, coming up with a proposal for how to fix our users’ pain points, working with our designer to create designs, and collaborating with the engineers to build, test and release the feature.

What’s one thing you’re working on right now that you’re excited about?

This is an exclusive scoop as we haven’t announced this feature yet, but Anomaly Detection.

It's a feature that will proactively alert users whenever their data exceeds the expected range. A sudden spike in feedback mentioning errors and bugs? You’ll be the first to know.

This is something we were able to offer as a bespoke extra for a small number of clients, but it required a lot of manual set-up behind the scenes. My job has been to build this feature into the platform so everyone can use it. Keep your eyes peeled for more updates.

How would you describe the team at Chattermill?

The people have always been one of the best things about Chattermill. The thing I hear most from new joiners is how kind and welcoming everyone is. On top of that, everyone is very driven and passionate about what they do. I’m constantly learning something new from my colleagues.

What’s your favourite thing to do outside of work?

I’ve recently got into swimming (think more sedate breaststroke than Michael Phelps), and I’m really enjoying it. It’s a nice way to switch your brain off for a bit.

What was the last book you read?

If you had an unlimited supply of one thing, what would it be?

Cadbury’s Marvellous Creations chocolate – kept in the fridge. I know this is a contentious issue, so I hope the room temperature chocolate lovers will forgive me.

We sat down with Katrina Berke from Solutions Consulting to discuss why she joined Chattermill, her experience of changing departments, and her travel bucket-list.

Women of CX: How Amazon drives customer-centric growth at scale

Read our roundup of Amanda Whiteside, Head of Worldwide Customer Optimisation and Enablement at Amazon's conversation with Chattermill’s Anisha Kainth.

There are critical risks hiding in your customer reviews, support tickets, and conversations. Many of which you might not have even noticed…